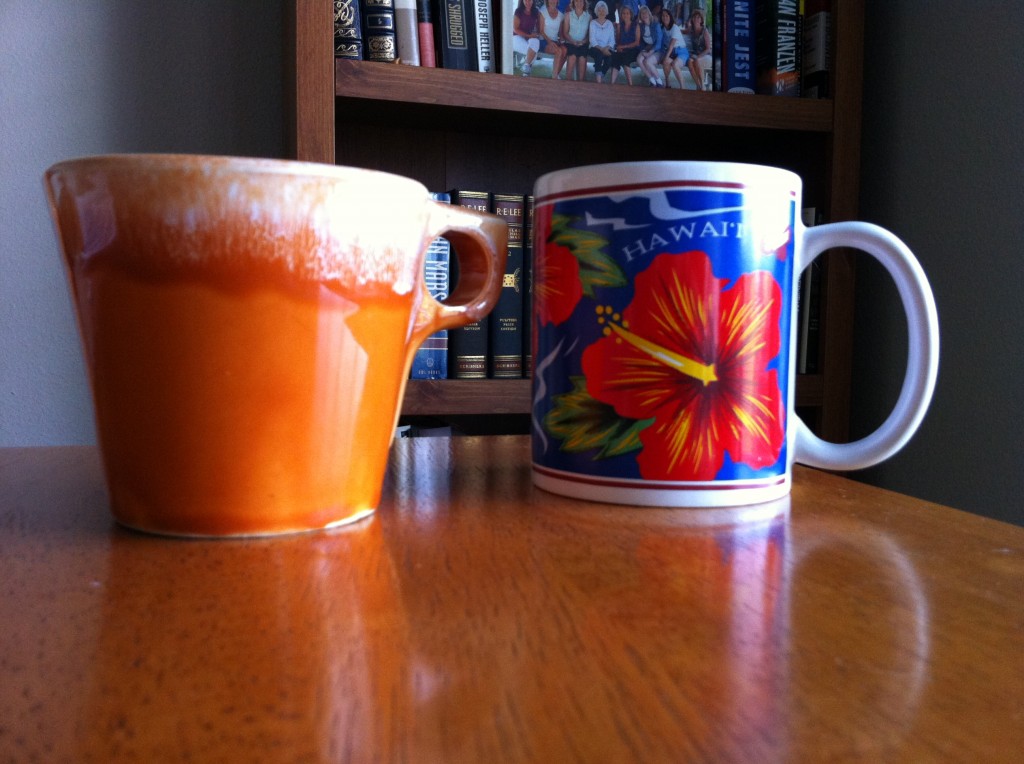 People have all sorts of rituals, conscious and otherwise.  Maybe it’s communion, or high tea, or a prayer.   Maybe it’s rolling a cigarette, or nursing a grudge, or mixing a martini.  Maybe it’s deceit, or cruelty, or self-sabotage.  Or an athletic event, or a concert.  Or building a campfire in the mountains.

I usually have at least one conscious one going; something I think of and self-identify as a ritual.  A routine that provides purposeful, calming focus for me these days is preparing coffee with a French press.  Without realizing it at first, it has become a rite of sorts, a ceremony with its own meaningful steps and sacramental instruments.

I am neither a coffee fiend nor a coffee snob.  I grew up on the instant stuff.   My typical weekday consumption consists of one cup at the office upon arrival, the occasional drive-thru latte, or a styrophome cup of repair shop joe. These don’t count as ritual for me.

My ritual is for the increasingly rare weekend morning when I have time for a relaxed cup or two of coffee at home.  Saturday mornings, I usually work out and don’t have enough time to enjoy a cup before dashing out the door.  On Sundays, I may meet my older son, Robbie, for breakfast.   But if I have a morning when I don’t have to go to work, or to the gym, or someplace else, a quiet morning when I am free is the perfect backdrop.  Preferably a rainy morning.

It began in January.  Robbie was dating a girl who was a coffee barista on the Drag.  Making conversation with her one night, I asked for her recommendation for making coffee at home.  She categorically and enthusiastically endorsed the French press.  I went online and researched.  I bought one, along with a special bean grinder.  I experimented and practiced, perfecting my technique with different strains and roasts and bean-to-water ratios, (ah! The sacred ratio), becoming smoother and more efficient, until finally being able to boast proudly at the gym, “I can French press two cups of coffee and not even break a sweat!”

On a Friday afternoon, I swing by the Whole Foods downtown and buy a few scoops of dark, oily coffee beans.  I look for beans that have been roasted that day.  The deep aroma of a dark Vienna roast fills my car on the drive home and lingers there long after I’ve taken my little paper bag of magic beans inside, where they wait for me in the kitchen until morning.

Order of Service.  I zap a quart of water in the microwave for six minutes, while spooning out four scoops of beans into my grinder.  It takes about 10 to 15 seconds for a rough grind, which is what you want for a press.  Not too fine, or the grounds will seep into your coffee.  I empty the ground coffee into the bottom of the French press’ glass pot.  I pour in the piping hot water, covering the ground coffee at the bottom and filling it almost to the top.  I stir it for a moment, using a wooden spoon so as not to scratch the glass decanter.   I put the plunger on top of the pot and turn the lid to close off the spout opening.  I let it sit for five minutes and then press down lightly on the plunger, applying slight pressure, slowly but firmly until it rests on the settled grounds at the bottom of the carafe.

I feel intentional about the procedure.  I like that my hands are engaged as I measure and judge and transfer special material from one vessel to another, changing its form and properties as I round the Stations of the Bean.

From a shelf of mismatched coffee mugs, I reach for either the plain, brown utilitarian mug Dad cradled in the mornings when I was growing up, and which I took to college and kept, or a brightly colored floral mug my younger son brought me from his band trip to Hawaii 10 years ago.  They’re usually in front.  One connects me to Dad; one to Paul.  One as son; one as father.   I’m comforted by the connections.  Either way, with either one, I feel grounded and certain and solid in my role.  Perhaps more so than in other less defined relationships.   So anyway, I get a mug.  (When using the mug from the islands, I also wonder if I can afford Kona beans on a regular basis.)

I pour the steaming brew into the chosen mug, add agave nectar and almond milk to taste, stir, and then, presto, it’s time to sit back and enjoy, steam rising from the cup as tiny bubbles settle around the rim.  I cup the mug in my hands and take in the warmth radiating out into my palms.  I step to the back porch with my drink and whatever book I’m reading, or the paper, and settle into a favorite wicker rocking chair.  It belonged to a dear aunt of mine, Dad’s sister Rosemary, who died a few years back.  I’m sitting with her sometimes as I gently rock.  I’ve put some music on shuffle and an eclectic mix wafts out the screen door to my sanctuary.  I exhale.  I relax.  I breathe in the heady aroma, almost like incense.  I take in the smoky flavor, the flinty, satisfying finish.

Sometimes, I imagine sharing this with someone.  Wherever two or more are gathered, as the saying goes.  Other times, not so much.  I’ve got company already.